While making JSCocoa play nice with the ObjC garbage collection I've had trouble fixing the leaks. JSCocoa is a bit peculiar because it must protect and unprotect Javascript values from the Javascript GC, but mark them as reclaimable as objects die. Plus there's some malloc and mmap memory that must be freed manually.

Instruments usually works great for finding leaks, but alas doesn't work under ObjC's garbage collection. We can however find a reasonable substitute in the ObjectAlloc instrument by approaching the problem differently :

Run Instruments with Run→Start with Performance Tool→Object Allocations. After that, each Build and Go will launch the new build in Instruments. 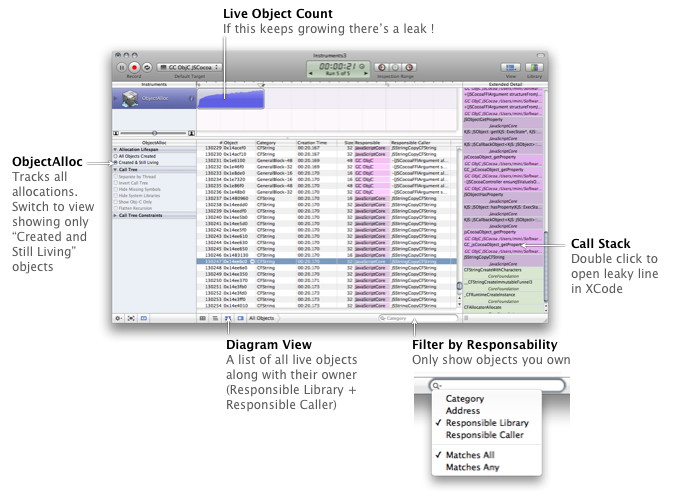 From there we can filter objects by responsability, that is showing only the objects from our app or from a specific lib. That was particularly useful to find both my leaks and a leak from my JavascriptCore usage. JSStringCopyCFString will create CFStrings that I usually cast to NSString then release — but this leaks as CFTypes must be CFReleased. Instruments pinpointed each instance of the problem. I could then double click the function call in the call stack, open the leaky code in XCode and fix it on the spot.

What changed in JSCocoa to enable it for GC :